The Dual Speed Mini-K Kinechek Speed Regulator is specially designed for the drilling of carbon fiber and other composite materials, especially in hand-operated drill applications. 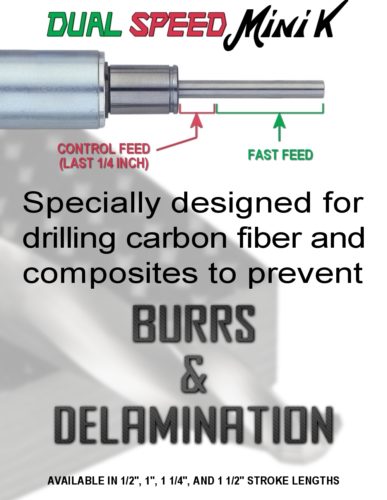 During the drilling of an in-line hole, a negative deformation plane forms as chip formation stops and the tool approaches the end of the cut. The shearing of the negative deformation plane contributes to burr formation as cracks spread along the plane causing destruction of the desired finished exit hole. When drilling carbon fiber and other composite materials, the breakout can occur with “delamination” which is a costly problem.

The “Dual Speed” function increases production efficiency and reduces worker fatigue while preventing damaging delamination and breakout. The first part of the stroke is the “Fast Feed” (F.F.) feature, which is freely managed by the worker (SPEED 1)* to drill as quickly as possible through the workpiece. The final 1/4 inch of the stroke is the “Control Feed” (C.F.). As the drill nears the exit hole, the C.F. engages and slows down the forward motion (SPEED 2)** to minimize splintering and delamination, hence the name “Dual Speed”. Although our standard C.F. is fixed at 1/4 inch, this distance can be customized to your particular application.

* The F.F. (SPEED 1) is not affected by the unit’s adjustment knob. It is, however, subject to the viscosity of the unit’s internal fluid. For instance, the F.F. of a “Standard Speed” Dual Speed Mini-K unit will have more more resistance (or move slower) than a “Fast Speed” Dual Speed Mini-K.  In hand-held applications, SPEED 1 is directly proportional to the force applied by the worker.  The length of the F.F. can be customized to a particular custom application but, once established, it cannot be altered.

NOTE: Except for the Cushion-Start (special combination shock absorber and speed regulator), Kinecheks are not designed to withstand impact from a free-traveling force or load. See our Kinechek bulletin for more details 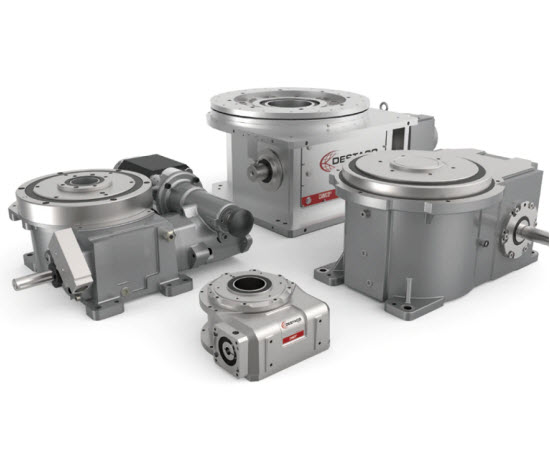